It's ALL a Gift 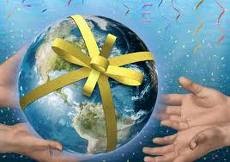 I often talk about the gifts in life.  Big and small, they're everywhere.  We just have to train ourselves to look for them... to SEE them.

The other night there was a full moon.  We had a clear night sky so it was shining brilliantly.  My husband was at a meeting.  When he was on his way home he called me to make sure I got out to see it.  That was two gifts for me:  1.  The beautiful full moon; and  2.  My husband appreciating it enough to call me so I could see it too.  Obviously the moon is there for everyone.  But I wonder how many people took the time to go outside, stand there for awhile and appreciate that beautiful gift.

My neighbors have an above ground pool.  Every year before they open the pool, a couple of ducks use the water on the cover to mate and eventually train their ducklings to swim.  When they're big enough, the mother takes the babies to a pond at a nearby college campus.  What a gift to be able to watch this process every year.

In last week's blog I wrote about how great life is, how everything was going so well, how I was loving life.  Then on Monday - the day I posted the blog - the bombs in Boston happened.  Then the poisoned letters were detected.  Then the explosion at the West, Texas fertilizer facility.  Then the M.I.T. shooting.  Then back to Boston/Watertown with the shoot out and killing of one of the suspects in the bombing, and the search for and apprehension of the other suspect.  THEN the earthquake in China.  So much misery, so much suffering, so much loss of life.  NOW WHAT?!  Did this change my outlook?  Did this change my happiness?  I have to say, this certainly challenged my belief system... briefly.

I am so sorry for all the people who were injured in any of the above mentioned events and for their families.  My heart, compassion and prayers go out to all of them for as long as they need it.  But did you see how wonderful people have been?  Ordinary people stepped up and did extraordinary things when it was needed.  It's a situation I hope none of us ever have to face.  But when these ordinary people were faced with it, they became heroes.  They performed heroic acts without ever giving it a thought.  A lot of the stories haven't even been told yet.  Some may never be told.

These were big events... national news.  But I see things like this happening all the time.  I live in the North Eastern United States.  We get snow... LOTS of snow.  All winter when cars get stuck in the snow, complete strangers will stop and help push or dig them out.  That's just one example.  People are basically good.  Sure there are a few strays that can make you think otherwise.  But think about this: the Boston bombings were apparently accomplished by TWO people.  But hundreds if not thousands of people have responded with love, compassion and help of all kinds.

Fred Rogers said, "When I was a boy and I would see scary things in the news, my mother would tell me to look for the helpers.  You will always find people who are helping."  I've seen that and I believe that.  The goodness of humanity is amazing and I'm STILL loving life.

I am so enjoying my life.  I can't even explain why exactly.  I'm just happy.  Of course I have a wonderful family.  I have a beautiful home.  I have great friends.  Life is going well.  My life has always been good, but lately I've just been so excited.  Every day I wake up with a feeling of anticipation.  I can't wait to see how the day is going to unfold.  I can't wait to see what surprises and gifts are coming my way.  And I'm never disappointed.

The thing is, I don't think the things around me have changed that much.  I believe it's me that has changed.  I'm trying to consciously choose to see the good, positive, uplifting things in life.  I'm choosing to see, acknowledge, and be grateful for the miracles that are happening all around me - big and small.

Oscar Wilde said, "To live is the rarest thing in the world.  Most people exist, that is all."  Maybe that's what has been going on.  Maybe - after 62 years of life - I've FINALLY discovered how to live instead of just exist.  Whatever the difference is, I'm loving life!

We are having the most beautiful day.  It's March 30th - Holy Saturday.  As I'm writing this, the thermometer outside my kitchen window is reading 78 degrees.  Now I know that is not the official temperature.  Right now that thermometer is in the sun.  But regardless of the official temp, IT'S ONE GORGEOUS DAY!

It's one of those days where you really feel like doing some spring cleaning... and I did.  I cleaned and rearranged the grand kid's playroom.  That's something I've been thinking about for awhile, but I just couldn't get motivated.  This weather motivated me.  All the windows in the house are open.
My daffodils are blooming.  My husband washed my car and his truck.  I washed the door jams.  My husband took his first motorcycle ride of the season.

It just feels so good to be outside again.  It's finally feeling like spring.  It's that wonderful time of the year when we all start moving from indoors to out.  We're like butterflies emerging from the cocoon of winter to the freedom of spring and summer.  The sun is shining, birds are chirping and all is right with the world.

Love, Paula
Posted by Paula at 7:00 AM No comments: