The Christmas That Never Was

Sometimes, no matter how well planned, things don't work out.  Well, our Christmas this year was a great example of that.

Here was the plan:

12/22 - My grandson's birthday.  We go to my daughter and son-in-law's house in the afternoon to celebrate.  That evening after the party, my daughter-in-law will go to Pittsburgh to pick up six of her family members who were coming from Honduras for a Christmas visit.

12/23 - My mother-in-law's 81st birthday and my husband's family's Christmas get together.

12/24 - My kids and their families - and my daughter-in-law's family - over for dinner and Christmas gift exchange.

12/25 - Over to my daughter's at 7:30 AM to watch the kids open their gifts from Santa and then have breakfast.  Over to my son's at noon for dinner, to see their gifts, play games and enjoy the company.

Here is what happened:

12/22 - My grandson's birthday party went exactly as planned.  The little guy turned six and had a great time.  When my daughter-in-law left the party, she travelled to Pittsburgh to pick up her mother, two sisters, two nieces and a nephew.  Only one sister and her nephew made it.  The others missed their plane in Houston going through customs.  They got boarding passes for the next evening, but they were  also on standby for the earlier flight.

12/23 - The only problem was that they didn't have international phones, so they couldn't call my daughter-in-law to let her know either way.  Because of security, the airlines wouldn't let her know if they made it on the earlier flight or not, so she had to make the trip to Pittsburgh.  They weren't on the flight.  So my daughter-in-law was late for the Christmas gathering, but she made it.  My sister-in-law who did most of the planning couldn't make it because she had the flu.  Another sister-in-law didn't come because she threw her back out.  My mother-in-law almost didn't come - to her own birthday party - because she was in a lot of pain.  She mustared up the strength though and made it.  After the event, my daughter-in-law went back to Pittsburgh to pick up the rest of her family.  Three round trips in 24 hours, but they FINALLY all made it.

12/24 - My husband and I were up early to get dinner ready for our 17 dinner guests.  My daughter called to say that her son had a temp and they weren't sure if they'd make it.  Then my husband got a call that his mother had fallen.  He had to go to her home to see what he could do.  I kept working on dinner.  My husband's mom ended up in the hospital.  His brother went so he could be home for company.  My grandson rallied, so my daughter's family ended up coming.  We had a lovely afternoon of food, gifts, conversation and playing.  Around 3:00 my husband left to relieve his brother at the hospital so he could be with his wife - the one that threw out her back.  Everyone left around 6.  My husband got back at 6:30.

12/25 - My daughter called.  The kids were up early and we could go over as soon as possible.  She would try to hold them off.  We got there to watch the kids open their gifts and had a good breakfast cooked by my son-in-law.  My grandson wasn't feeling good, but he tried to have fun.  He ended up having the flu.  We went to my son's later for dinner and a fun family gathering.  We had a lovely afternoon.

12/26 - Our furnace quit working.  We were without heat.  Fortunately we were able to get someone there fairly quickly. 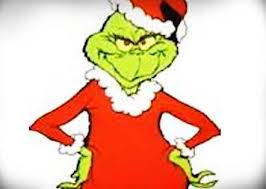 I think the lesson in all this is that it's okay to plan things, but you need to stay flexible.  Sometimes life will throw you a curve.  Sometimes the plan changes in mid stream.  If you're flexible, your holiday (or whatever "day" it is you're planning) won't be ruined, it'll just be a little different.  And as the Grinch said,  "Christmas came.  Somehow or other, it came just the same."